Los Angeles has acquired a reputation for being "sprawling" and auto-centric. What is less known is that the urbanized area is very densely populated.
While skylines of high-rise office buildings are what most people associate with dense big cities, they are office buildings and what I am more concerned with is the actual residential areas. In the case of Los Angeles, it is consistently dense over a wide lateral area, in contrast to many places (including New York and other Eastern US metropolitan areas) that have a dense core and then rapidly lose population density the further you go from the city center. In New York's case, Manhattan has a density of around 70,000 people per square mile on average. This drops by half to 35,000 people per square mile in Brooklyn, and is extremely low density by the time you get to the suburban towns far from the core. In Los Angeles, there are patches of high density and in between is moderate consistent density and then an abrupt end to development at the mountains and desert on one end and the ocean on the other.
There are no very low density areas to bring the average very far down. The core residential area of L.A. (the Koreatown/Wilshire Center area) has a density of 42,000 people per square mile 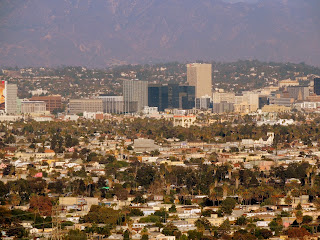 This is a very large area west of Downtown Los Angeles and south of Hollywood. Commercially, culturally, and socially it is the heart of the largest Korean population outside of Asia. Demographically it is actually predominately Latino (most of the Koreans reside elsewhere but spend business or entertainment time in Koreatown). Overall it is very dense. The high-rise offices line Wilshire Boulevard and many of the side streets contain blocks of apartments like this: 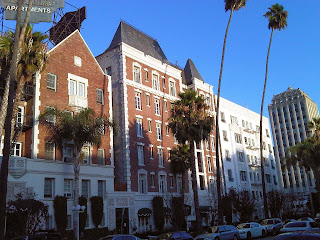 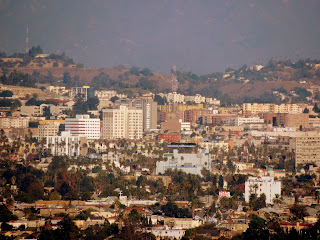 Westlake is immediately west of Downtown and east of Koreatown, so between the densest part of Los Angeles and the major business center. It has a density of 38,000 people per square mile and is known as the major focus of the Salvadoran, Guatemalan, Honduran, and Nicaraguan populations of Los Angeles. 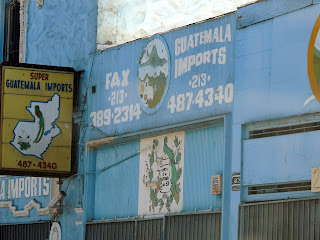 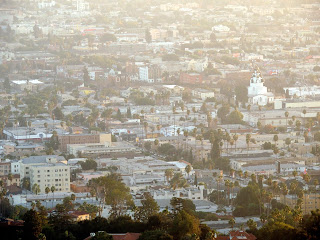 With 31,000 people per square mile, this is the third most densely populated part of Los Angeles. It is very multi-ethnic and includes Thai Town and Little Armenia as well as the local landmark Holy Transfiguration Russian Orthodox Church.
Aside from these three densest parts of Los Angeles, several other areas have caught my attention, and also ground level observations of conditions of human habitations.
Los Angeles has historically had periods of chronic housing shortages. In the 1950s and 1960s there was a large move toward constructing multi-family apartment buildings instead of detached single family residences. It is common to see these buildings along major streets as well as entire neighborhoods that were "up-zoned".  Most of these apartments are only a few stories tall and there are only a few high-rise residential towers in Los Angeles, all of them either very expensive or senior living quarters.
A more pressing housing shortage has been the shortage of affordable housing. LA Weekly recently ran a series of articles about how people are finding new ways of living. Many were targeted at LA Weekly's typical readership audience, and are through their eyes. One way mentioned was settling in San Fernando Valley communities instead of areas on the L.A. Basin coastal plain that have gentrified such as Silver Lake, Hollywood, and Venice. Another trend has been the rise in co-housing and other cooperative living arrangements among people finding difficulties renting on their own. Of course sharing shelter has been happening for awhile in the case of many low-income families and is responsible for the densities in highly populated parts of the city such as Westlake and Pico-Union. In addition, the quest for living space has seen as many as 250,000 people living in converted garage spaces in Metropolitan Los Angeles, according to Cal State Northridge geographers. This is accompanied by numerous add-ons and back houses leased to non-relatives, desperately searching for an affordable place to live.
Little vacant land exists in the Los Angeles area upon which to build new residences. Infill development on parcels where a former non-residential structure or structures is/are demolished and new residential use is constructed has occurred. In addition, there has been a focus on TOD or transit-oriented development, where emphasis is placed on building adjacent to mass transit.
Smart growth policies aside, housing has been built where available often in seemingly precarious situations, such as partially off of hillsides.

And of course nothing can be said on the habitats of the human population of Los Angeles without mentioning people who sleep on the concrete sidewalks, some with concrete roadways or cardboard or tents above them, and some without.
In order to combat the mental conditions that can arise from a concrete and nearly fractal-less environment, people do with spaces what they can to create oases.
Enlivening the walls of the structures are also methods of finding human peace.
Or finding creative ways to protest when the artistic expressions of murals are denied. 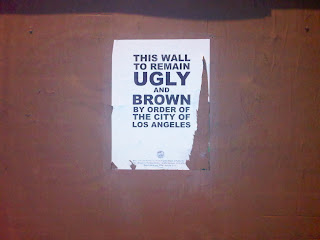 Fortunately, it is also possible to escape to the ocean at undeveloped beach sites, or to head up to the mountains around Los Angeles, to rest at perches above the city.

V
Los Angeles, California
"V" grew up in the San Fernando Valley. He is an urban studies/urban planning student.